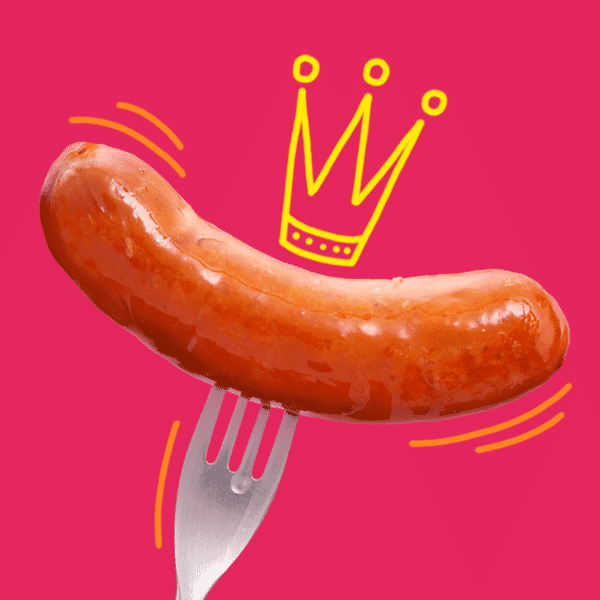 A tongue in cheek look at how a category is reinventing itself for a meat-free future.

Once the hero of breakfasts, the sausage has had a less than dignified fall from grace. Whenever an article about health and obesity hits the headlines, the sausage is unceremoniously dragged across the coals. It became vilified, the poster boy for all that is bad and unhealthy. Of course, we needed someone to blame for the nation’s state! Coupled with that, consumers move to younger, more fashionable, and perceived healthier options such as oats, whole grains, fruits, and yoghurts; the sausage suffered damage to its gleaming crown.
Many producers have tried to reach the holy grail of meat sausages with new product development – promising all the flavour and texture but without the unhealthy qualities. Some even came close a few years ago, causing hysteria and frenzied panic buying when articles and news broke of new sausages with all the good but none of the bad. But so many didn’t quite cut the mustard – the subtly of taste and texture was compromised. The sausages’ quick trip to the gym to get healthy was as short-lived as a New Year’s resolution. And the search continued

The sausage was under threat, destined to be a nostalgic memory of what we used to enjoy.

For years reports and the media have been telling us that large scale meat production is not sustainable and good for our planet. But suddenly, there was a glimmer of hope for our sausage, and surprisingly it turned out to be meat-free! You can’t help noticing that more and more products are becoming plant-based.

This was the opportunity the sausage needed, a chance to reinvent itself and to shake off the unhealthy stigma. Our Brandscape brand agency insight has shown us that Its reinvention was partly driven by the rise in environmental consciousness and the increased demand for flexitarian diets. There is now an abundance of brands, all producing their own version of meat-free sausages. Consumers who had started to turn their backs on the Great British icon were now embracing it once again.

It’s been a rocky road, but the sausage has managed to reinvent itself. To pull off the rebrand of all rebrands and come back better than ever. Indeed, this will ensure that the humble sausage never leaves our tables again and will always be on our menu.

The sausage has consistently remained in the top 10 of our nation’s favourite dinners – with the family favourite classic pork version outselling all others, coupled with a considerable increase in consumption of plant-based options.

The sausage has got its sizzle back!

Wow Me Design is the Cheltenham-based brand development agency creating brands people want. We would love you to get in touch at hello@wowmedesign.com